I am still in the festival mood and decided to prepare this long pending mixture last week. The only reason I kept postponing was because it always felt like a lot of work given that this snack is a combination of various savory snacks. Thinking about it, I had already blogged the individual snacks like karaboondhi, oma podi, channa dal and I finally took the plunge. Since we are going to be mixing all the items together, a little of each is good enough and that made the job simpler too.

This is a versatile snack and you can add other savories also to it. Some people add a little murukku, kara sev, maida biscuit and so on. Either way it is a tasty and addictive snack and I am glad I can finally cross it off my list. Off to the recipe.

Savory snack that is a mixture of a variety of snacks.

Garbanzo
Soak garbanzo overnight. Spread on a plate to dry. Heat oil and fry the garbanzo until the sizzling stops and they start floating. Remove from oil and season with chilly powder and salt.

Peanuts and Cashews
Deep fry in oil until crispy and golden brown.

Toss it all together and season with salt and chilly powder if needed. Allow to cool and store in airtight containers.

My Notes
1. For karaboondhi, we normally fry cashews, peanuts and curry leaves. Since I was already frying those for the mixture, I have not included those in the ingredient list for karaboondhi. Also instead of turmeric, I have added red food coloring.
2. You can also add other savories like kara sev, potato chips and so on.

Pictorial
1. Soak garbanzo overnight and spread on a plate to dry. I let it dry for a couple of hours.

2. Heat oil and fry the garbanzo until the sizzling stops and they start floating.

3. Remove from oil and while warm, season with salt and chilly powder. 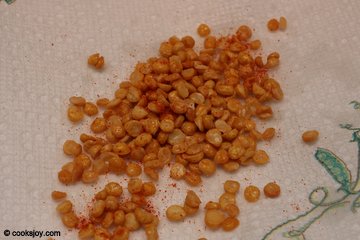 7. Fry peanuts in oil until golden brown and crispy

10. Toss them all together. Add chilly powder and salt if needed. Allow to cool and store in airtight containers.

and Priya and Sangee’s Diwali Delicacies.