Halloween: How to Carve a Pumpkin

It is quite interesting to look back and see how Halloween celebrations have been changing over the years in my house. Before the kids, it was only about distributing candy for kids. When the kids were born, it was all about dressing them up and taking them for trick or treat. Now that my boy is old enough to carve, it has been all about carving pumpkins and dressing up. We did our first pumpkin carving last year. This year it was a mini party with 6 pumpkins being carved. We had few friends who had their kids over for carving as well. It was quite a sight to see the kids running around and the stages of carving.
I have to mention that the only role played by me in this carving process was the role of the photographer. How can I get my hands dirty and also take photos right? (Truth is I cannot stay still and make something since I am so used to multitasking !! ). In fact, I was actually running around from one kid to another capturing their carvings and was also running indoors preparing a salad for the blogging marathon.
Overall it was a fun experience and thanks to K who supervised the whole carving session and also assisted the little ones with their carvings.
So what are you carving this halloween? 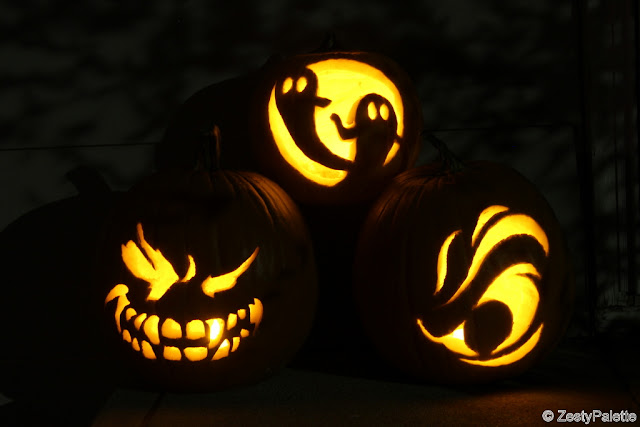 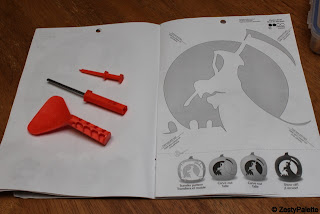 The first tool is for scooping the seeds out and you can use a spoon instead. The 3rd tool is used for poking holes to mark the image on the pumpkin. You can use a pencil instead. It is only the middle tool which was used mainly and that is the carving tool. You use that to carve the pieces off the pumpkin by following the holes you had poked with the image. 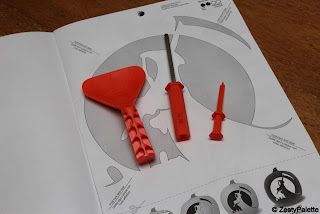 First using a cello tape stick the stencil or template to the pumpkin. 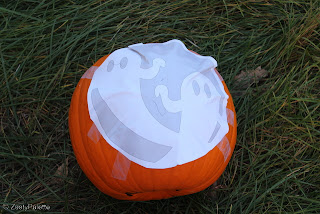 Start marking the design. You can use the special tool which comes with the carving kit or just use a pencil 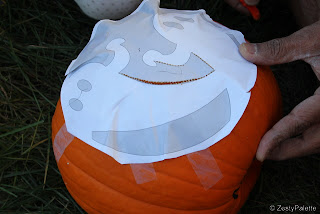 Can you see the image all marked out? 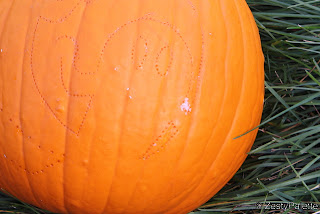 Time to get the hands dirty. First cut a small portion at the top of the pumpkin as shown. 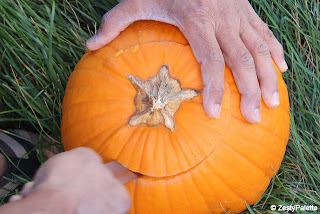 Remove it. Save the piece as we will be using it to cover the pumpkin later. 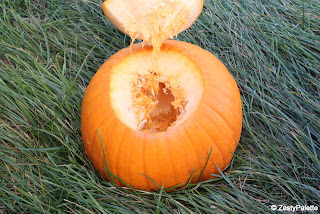 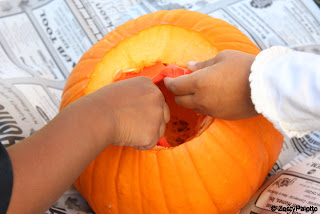 When I asked my 3yr old to show me what she scooped out, this is what she showed. 3 seeds per scoop means we are going to be scooping all day

. Luckily she got bored in a while and requested for help. 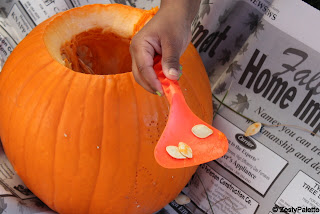 The inside of the pumpkin is all clean and ready. 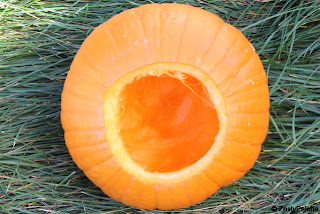 Using the tool provided, start the carving along the dotted line. 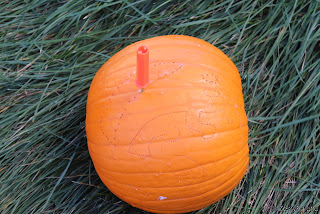 See how a portion has been carved and removed. Repeat until you have covered all areas of image. 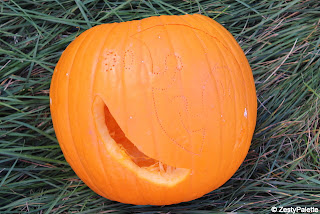 The image is fully carved. Can you see a couple of ghosts? This was the smallest pumpkin and we gave it to my 3yr old. 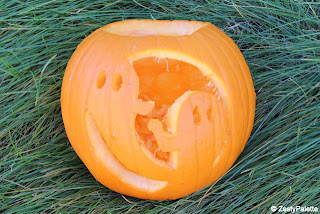 This is what my son carved with dad’s help. 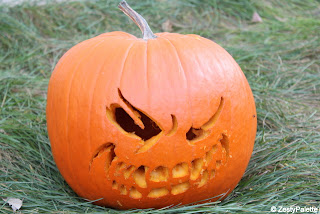 We are done finally. Place some lights inside and put the lid on (the piece we saved earlier). I have used small flameless candles inside the pumpkins. 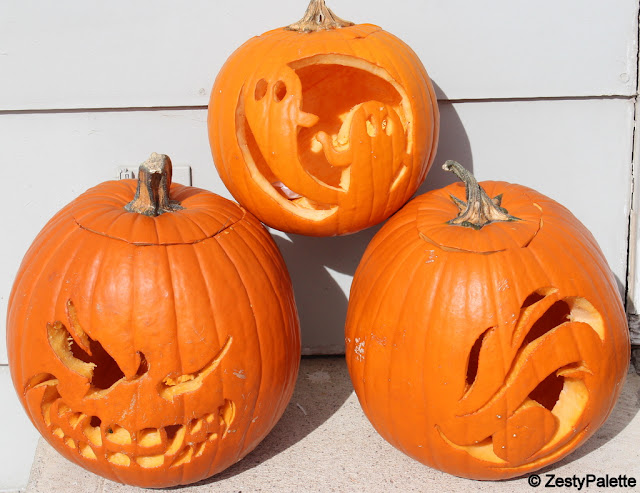 With the porch lights on. 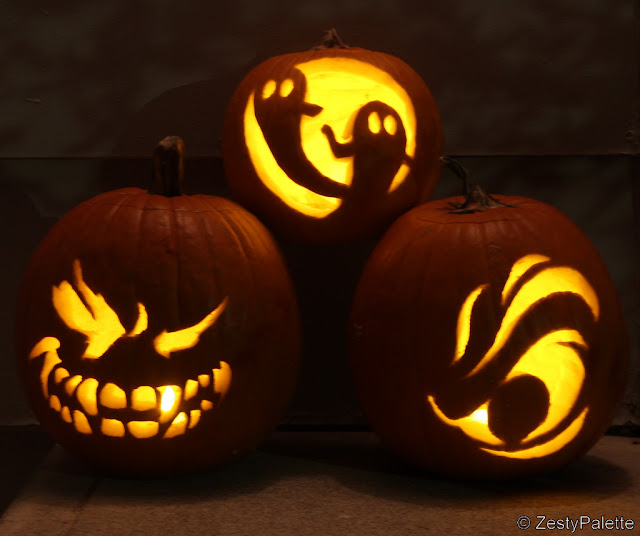 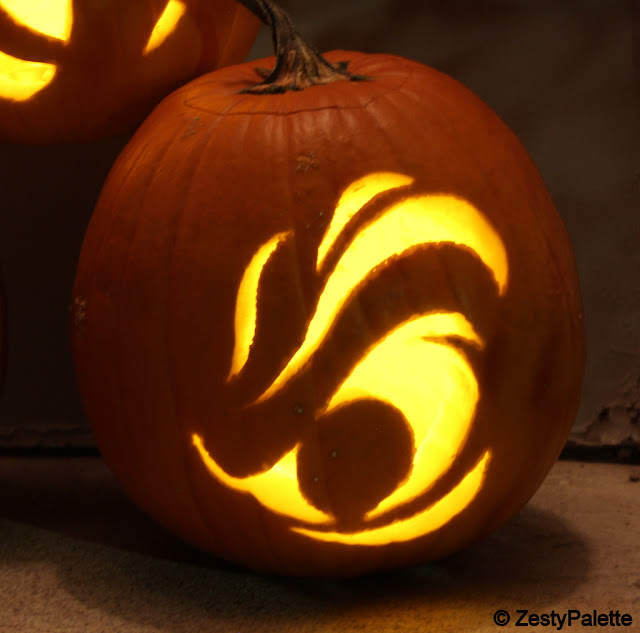 Sending to my Halloween Fiesta hosted here. The pumpkins in the logo were carved last year. 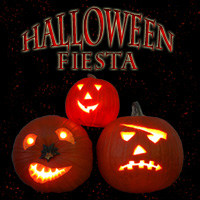